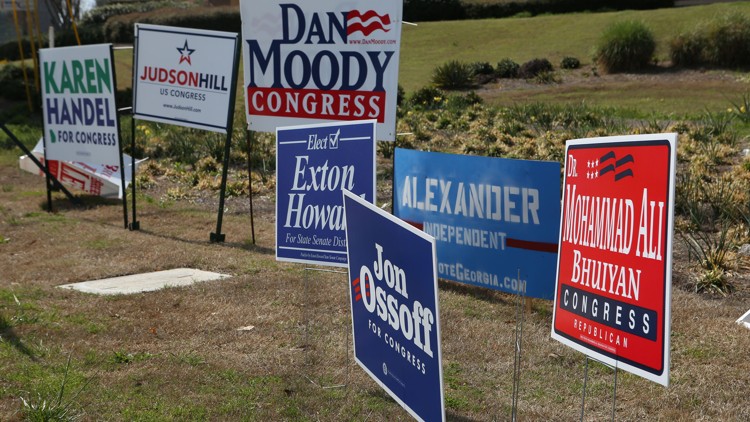 UPDATE: The numbers: Though the promoted Democrat candidate in the Georgia Congressional special election received the most votes cast at 92, 390 votes which gave him 48.1%, again, short of the 50% plus one to avoid a runoff for the House seat, the other four democrat candidates combined only earned 1,521 more making a total of 93,911 votes cast for Democrats, adding an extra .9% to their party total, or 49%. With eleven Republicans appearing on the ballot, splitting their numbers widely among voters who vote Republican, the winning candidate earning the most among them, Karen Handel, receiving 37, 993 and 19.8%, the other ten candidates received 60,004 more votes making a total of 97,997 votes cast for Republicans, adding an extra 31.2% to their party total, or 51%. The two Independents on the ballot earned 176 votes together. These numbers and the history of the district show in the upcoming runoff, Handel will keep the seat Republican. Long pocketed liberals and democrats who care to send more millions to Ossoff, in hopes for an upset can do so, but they shouldn’t bet the house on it.

UPDATE:  Results from Tuesday’s Special Election congressional race in Georgia’s sixth district, have the left in the media narrating today Jon Ossoff’s failure to win the seat last night as a big success. Unable to achieve the necessary fifty percent plus one to avoid a runoff against the Republican challenger who garnered the highest percent out of eleven candidates competing on the ballot, he now will face another election day on June 20th with former Secretary of the State, Republican Karen Handel.

Only the left could skew the fact that Ossoff, despite an astounding cache of eight million dollars in his campaign treasure chest and a divided Republican ticket that gave voters eleven different choices on who to vote for in the Republican Party, somehow was victorious yesterday because he almost reached the needed fifty percent, coming in with 48%. If a candidate has eight million dollars, an out pour of support nationwide from Democrat and liberal advocates, celebrity endorsements and no direct competition in terms of a one-on-one race in a very Republican district and can’t bring in a win, that’s pretty bad. Quite a loss, actually. Handel campaigned with a mere seventy-five thousand. 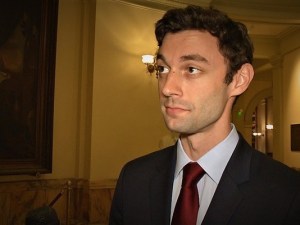 With 95% of Ossoff’s contributions coming from out of state, results will determine if elections can be be bought regardless of voter registration percentages or candidate experience. Ossoff has raised over eight million dollars for his first foray into any elected official status with an eighth of that total alone belonging to the Daily Kos, a liberal advocacy site. 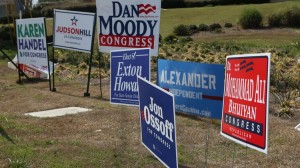 The big political story today is the special election race in the state of Georgia’s U.S. Congressional district six. With polls about to close, and voter fraud nothing new in this country, regardless of any denial by those who commit it or the mainstream media who continue the regular narration that this is not true, unless it benefits those they support, the country will see tonight why and how elections are won in politics.

Democrat leadership and their followers who still wake in a state of disbelief that President Trump won in November 2016 in such a large way he carried multiple states that have traditionally voted blue or democrat, to the point their party candidates don’t even have to put much campaigning time on their calendars for those areas. They somehow still perceive American’s who voted for Trump realize now the mistake they’ve made and would rush back into the voting booth to vote for Hillary Clinton, and still fail to recognize why Mrs. Clinton was a terrible candidate.

The glimmer of hope for Democrats both nationwide and statewide, is the fact that Clinton only lost to Trump by a little over one percent in November in this district. Democrats like to believe this is because the long held Republican voters here actually thought Clinton would be a better choice than Trump. Conservatives in the Republican Party believe Trump was perhaps too moderate for voters and stayed home giving Clinton a seemingly false advantage in final results. 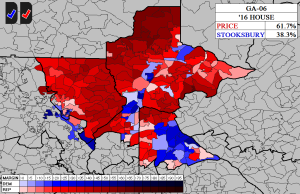 These statistics have given Democrats in power reason to flush the district with enormous amounts of money to support their candidate, Jon Ossoff, who has held no former political office and does not even technically live in the district.  In their vision, this would show America that the tide is turning their way.

Ossoff, a former congressional aide who now makes documentary films, needs fifty percent plus one to win this evening without a runoff. The customarily held turnout for Democrats will be their usual lemmings-to-the-cliff call to action, where they will all for one vote for the thirty year old Ossoff, who they have chosen over four other party contenders.

Republicans on the other hand, do their usual divide rather than unite act, which is really the only reason this seat is in contention at all. It’s unfortunate Georgia GOP State Chair, John Padgett, was unable to do a better job of uniting his party and multiple contenders behind one candidate to make a solid victory easy. Eleven GOP members are on the ballot none willing to step down for the arguably best candidate to win. This leaves a fractured vote from their caucus, however strong, to insure Ossoff wins less than fifty percent tonight.

This contest has led to President Trump using his Twitter account to make Get Out The Vote Tweets on the Republican side, to film actor (Samuel Jackson “Pulp Fiction”) making a radio ad to fellow democrats to not stay home on Election Day and help get rid of Trump.

Former Congressman Price won with a whopping 24% lead over his opposition last cycle.

Political analysts believe if somehow enough Republicans vote for one or two preferred candidates in their party, the runoff which would be held on June 20th, would most likely ensure this district stays red, or in Republican leadership, despite how many tens of thousands or more are pumped into the race before voting day