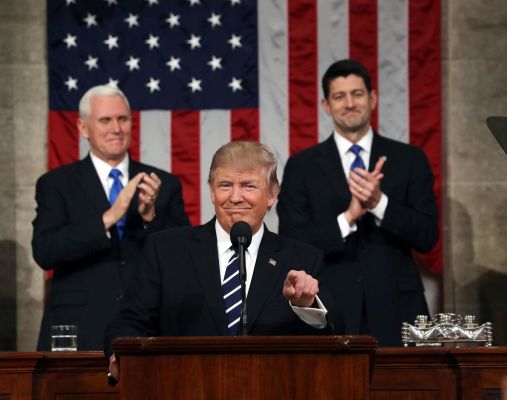 Washington, D.C. – Holding the most important office arguably in the world, the 45th President of the United States, Donald J. Trump, gave his first address to a joint session of Congress on February 28th, 2017, after being sworn in on January 20th, 2017. The businessman who won traditionally “blue” states, or states that vote repeatedly for Democrat candidates such as Pennsylvania, Michigan and Wisconsin, through hard work and a campaign message that resonated with a multitude of Americans disillusioned after eight years of a White House led by the previous Democrat President, Barack Hussein Obama, to “Make America Great Again,” gave an impressive, focused and illuminating speech on Tuesday evening.

Confident and bold, the forty-day old President showed how well he is fitting into this significant role. Clear on policy, firm in his original agenda he pledged to the voters of America, strong where strength was necessary and sensitive where humanity was needed, he demonstrated the noble ability to perceive views in a nation which requires world leaders to command with brawn, brains and heart. Trump’s commanding presence assured his supporters and broke through to some of the partisan Democrat detractors who replayed their usual predictable stance during these televised events when in the minority of sitting down in their seats, not applauding and visibly not supporting a Republican President.

Vice President Mike Pence and House Speaker Paul Ryan, were a positive visual on camera as they sat behind Trump during his address. With so much work ahead, the Republican majorities in the United States House of Representatives, Senate and Executive Branch will have to roll up their sleeves and make many of the difficult decisions that were put on the shelf under Obama. The Trump administration will make America remarkable again, and there are millions who can’t wait to see this change begin here in the U.S and across the globe. Even his detractors may be surprised by what this extraordinary man will do.

Post address comments by former Republican House Speaker and POTUS candidate Newt Gingrich which include “best speech of his career”: