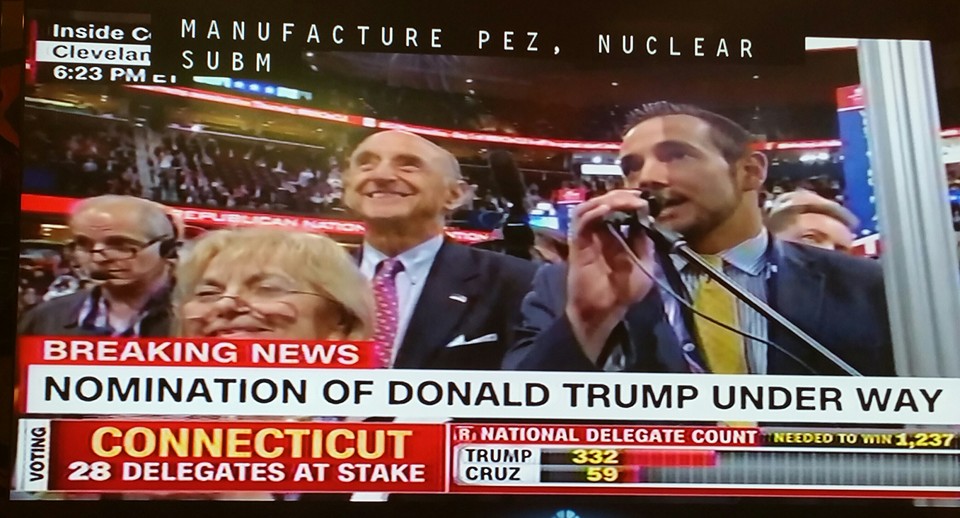 Speaking with the Connecticut Republican State Party Chairman J.R. Romano yesterday morning from his hotel room in Cleveland, the Republican Chairman who is serving his first term, when asked how the convention was going, said, “It’s been tremendous. The first night was outstanding.” He added all of the 125 delegates from Connecticut were very happy to be there.

Longo, a veteran member of the GOP who’s served under a variety of titles, is attending the 2016 national convention for the last time in this role. Leora Levy was elected earlier this year by State Central members to be Longo’s replacement in the RNC upon her retirement.

Frey, (R-111) is a state representative in the Connecticut General Assembly, serving his ninth term for the town of Ridgefield. He was appointed by RNC Chairman, Reince Preibus, to be one of three Sergeant-at-Arms, where his job will be to help keep order within the convention.

In the Connecticut presidential primary, Republicans voted big for the New York businessman Donald J. Trump, with 57.9% and 123, 367 votes. Ohio Governor, John Kasich, came in a distant second with 28.4% and 60, 481 votes. Third place went to Texas U.S. Senator Ted Cruz, with 11.7% and 24,969 votes. Connecticut Republicans backed Trump and after his strong finish were always clear they would give all of their delegate votes to the candidate their party members strongly preferred.

After an exhilarating opening Monday night at the convention that was filled with moving and passionate speeches made by the nights speakers, the Connecticut Party Chair when asked what his favorite moments were from last night, answered, “Marcus Luttrell.” The former Navy Seal known as “The Lone Survivor,” going off teleprompter, gave a heartfelt call to action to attendees and viewers from the next generation for heroes to step up and fight the war that is already here.

Romano continued with his thoughts and said he teared up during the time the mother of the son killed in Benghazi was on stage (Patricia Smith), but even sadder to him were the parents who all lost loved ones who were killed by illegals in our country, even if deported on prior occasions. He said as sad as the stories of the losses were within the military families, they sign up to do this. They know this is a possibility. “When I heard about the 17 year old boy on his cell phone…when you hear this, you feel helpless.”

The father, Jamiel Shaw, was on the phone with his son at the moment he was shot in Los Angeles by an undocumented gang member who mistook his son for a rival gang member because of his Spider-man back pack. Shaw told the convention, “My son’s life didn’t matter.” He said, “when they heard it was an illegal alien, they stopped calling.” Shaw went on to say only Donald Trump called him after this to offer his help.

In terms of the mainstream media’s and its predictable biased coverage of the Republican event, Romano observed, “The only thing the media is focused on is discrediting the Republican Party and making us not look unified.”

When asked about the unexpected spotlight on Trump’s wife, Melania, that the media took to this morning as their major talking point, in that she repeated a couple of lines current First Lady, Michelle Obama, used in her convention speech, Romano broke down the liberal narrative being broadcast today. In terms of this subject, their focus is “fifty word vs. email scandal; fifty words vs. national security; fifty words vs. terrorist bombings.”

He found their continued censorship of damaging news stories against the democrat nominee-to-be, former First Lady/New York U.S. Senator/2008 Democrat Presidential candidate/Secretary of State with her multitude of scandals and lies were illustrated more today with making such a small subject out of Melania’s speech their top news story.

In terms of predictions, Chair J.R. Romano has a positive view. He said, “Hillary’s not going to gain ground. All we’re going to see is Trump’s rise in the polls.”

When asked about Indiana Governor Mike Pence as Trump’s V.P. pick, Romano said he adds to that…

As for whether or not he believes there will be coattails for fellow Republicans seeking federal and state seats in Connecticut with a Trump win, Romano replied, “We’re making all the right moves in Connecticut for a Trump victory. There are built in benefits for our candidates.” He thinks in the Fifth District, for example, with coattails, a seven point spread might be enough to beat incumbent democrat Esty. (The Fourth District also has the same returns.)

On Tuesday evening, Party Chair J.R. Romano from the floor of the Cleveland Convention Center announced in his time at the mike, Connecticut is the land where we manufacture Pez, nuclear submarines and the home of WWE.  The delegation delivered as promised and pledged all 28 delegates to presumed-nominee, “the next President of the United States, Donald J. Trump.”

Under the administration of Governor Dannel P. Malloy (D) and the Democrat dominated General Assembly, Connecticut has been in last place in so many important ratings for years, that a first place finish in Slate magazine, not a conservative publication, must have pleased the Connecticut delegation. Slate chose Connecticut as numero uno in best “Best Job Bragging at the RNC.” It took Republicans to do this.

In regards to Wednesday evening’s drama during Texas U.S. Senator Ted Cruz’s speech, where delegates and guests shouted from the floor to Cruz to endorse Trump when it appeared he was clearly evading this direct choice of words, it appears this cheer was started from Connecticut’s own Avon RTC VC Stephen Hunt. As he divulged to me today: “I might’ve started the whole controversial Cruz thing…it was me that started yelling “endorse Trump”…then, everyone else did…then he’s like “I can appreciate the NY delegations enthusiasm”, and we all respond “and CT!” He’s at the end of his planned speech, and just sort of stuck there, as we were all drowning him out…now, I’m yelling “come on, you can do it…just say the words”…I’m only like 30 feet away…when he didn’t, everyone boos him off the stage…

Tonight should be another exciting night for all Republican National Convention participants with another impressive line-up of speakers to inspire all supporters “To Make America Great Again.” Enjoy.